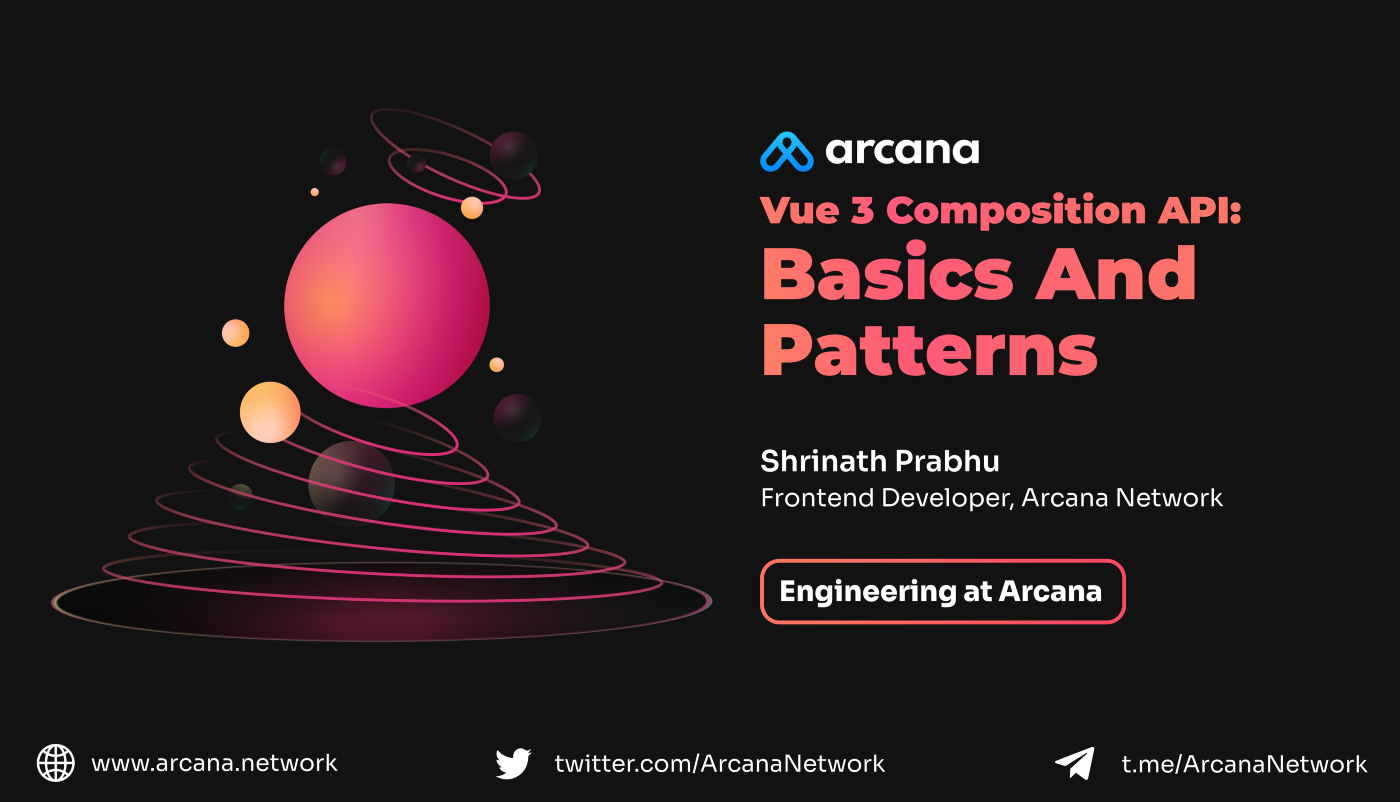 This blog is a part of our “Engineering at Arcana” series, and is written by our Frontend Developer Shrinath Prabhu.

Vue 3 introduced Composition API which allows developers to write components in a better way. Using this API, developers can group the logical pieces of code together, which in turn helps write readable code.

Composition API is a built in feature in Vue 3 and is also available in Vue 2 via @vue/composition-api plugin.

Before Composition API was introduced, Vue 2 was using Options API. While developers can still use Options API in Vue 3, the problem with it is that one single topic would be fragmented across different options such as data() or props, certain methods, some lifecycle hooks (mounted(), created(), and more), and watchers (watch).

With Composition API, you can organise code into smaller logical pieces, group them together, and even reuse them when required.

Let’s see a basic example to understand the difference of coding structure between Options API and Composition API.

This is how our highly logical code looks like in the Options API:

Now the same code can have separation of logic in the Composition API and it’ll look something like this:

Clearly the Composition API code looks a lot cleaner since it can have separation of logic.

The above code can be even more simplified by using the <script setup> syntax, which allows us to get rid of setup method and exports. The following example shows how our code will look like using <script setup>.

The example became even cleaner since it got rid of the export statement, the setup method, and the return statement.

The above syntax is the recommended syntax to be used while using Composition API.

Now let us see how to do code reuse using Composition functions. Before Composition API was introduced, developers were using the concept of mixins. A mixin is just a simple javascript which contains some vue options with some reusable logic that can be reused across multiple components.

Now let us see how we can use this mixin into our code:

Basically, we can use the mixins option of Vue to use all the mixins that we have created. Looks good right? But there are few problems with this approach.

Now let us see how we can use this in our code.

As you can see, it solves the problems that we discussed above:

What does Composition APIs expose?

The major advantages of using Composition APIs according to Vue’s official documentation are:

Here are a few disadvantages of using Composition APIs.

As mentioned in the advantages, Vue 3 is written in Typescript and has first-class support for Typescript. You can type check all the pieces of component, such as props, refs, reactive, computed, and emits using Composition API with Typescript. Moreover, Vue 3 has exposed all the required interfaces for using it with Typescript.

Learn more about the usage with Typescript here.

Following image is an example of a larger codebase that have multiple features in a component and different colours are used to indicate different logical pieces.

As you can see, the code looks more organized while using Composition API.

Want to know more about our latest testnet features? Book a demo.