Onboarding Users in Web3 and Managing their Data with Arcana 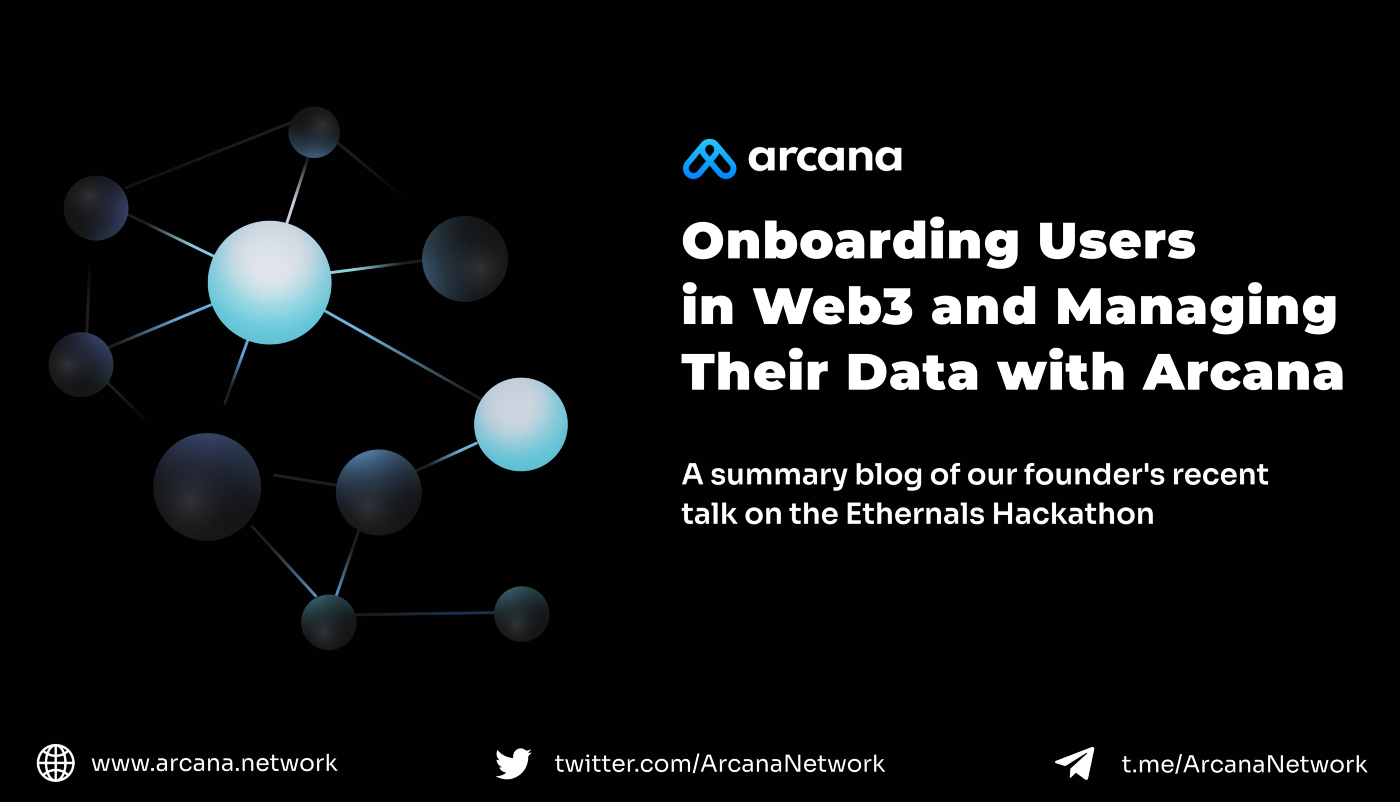 This blogpost is a summary of our founder Mayur Relekar’s recent session in the Ethernals Hackathon. You can check out the full video of Mayur’s session on YouTube (link provided towards the end of the blog). For those of you who’d like a quick recap of what the session was about, read on.

Before we dive into what the session entailed, we’d first have to touch upon what Arcana offers. We at Arcana are building a decentralized storage platform along with a Privacy Stack. This session, in particular, is about a part of our privacy stack, known as Arcana Auth.

So exactly does Arcana Auth do and what problems does it solve? It helps tackle the three major problems involved with onboarding users to DApps, which are:

When it comes to the ease of use of any DApp, wallets are the major concern to deal with. If a DApp requires users to install a wallet, that in itself can be a point of friction. Because users may not always be comfortable with installing a new wallet, getting acquainted with it, and so forth. On top of that, if users are needed to manage their own keys or the seed phrase, there is a likelihood that it would discourage them from using a certain DApp in the first place.

Time, in this context, is how long it takes for a user to start interacting with a DApp. If it takes long for users to get started with a DApp and use it, there is a strong chance of experiencing a high dropout rate.

Now that we have defined the three problems that are standing in the way of onboarding new users to DApps, we move on to three solutions that can be implemented to reduce friction and increase the rate at which users onboard. They are:

How Arcana Auth Fits into the Picture

Arcana Auth basically provides a no-nonsense, quick access to DApps. It does so by authenticating users using DApps through three modes:

So whether a user is a non-tech savvy individual or a Web3 native, there is no stone unturned to make the authentication process seamless and friction-less.

What Arcana Auth Provides & How it Works

Arcana Auth, in essence, provides a public-private key pair on any EVM chain (Ethereum, Polygon, BSC). In the near future, we will support other chains as well. With the use of these private-public key pairs, users can access their wallets, sign transactions, and encrypt data.

We now move on to understanding how Arcana Auth works. Consider a user trying to authenticate themselves in a DApp using Google Auth (which is one of the go-to choices for most internet users). Here’s the sequence of events:

After walking through the steps of how Arcana Auth works, Mayur went on to show a quick demo of how everything fits in together, followed by a round of Q&As before ending the session.

Want to know more about our latest testnet features? Book a demo.